Back in the ’60’s and ’70’s, one of the yearly events held by Pebble Beach Sports Car
Club was the Annual Sleeping Bag and Survival Tour. Not for the faint of heart, club
members ventured forth in various means of transportation, some sketchy while others
fairly roadworthy, packed with foods and means for fire, sleeping bags and pillows
stuffed in various nooks and crannies, with Tour leaders heading the pack to parts
unknown. Dirt roads or paved, it didn’t matter a whit as various destinations were
reached by nightfall. Some years it was Yosemite or the Sierras while others had us
closer to the Monterey Peninsula. One year it was Boonville near Mendocino for their
Boonville Festival complete with speaking in Boontling (a weird and special language
known only to the locals). No matter where everyone ended up, it was fun if your
version of fun involved sleeping on dirt and rocks, freezing your butts off, no showers for three days, toilets, like some of the cars, also sketchy, and food supplies running short
all the while us thinking that Donner Party group might have been on to something.

In the late-’70’s, motorhomes became the norm.  So did hotel rooms.  And showers and real live flushing toilets.  And restaurants.  The Sleeping Bag and Survival Tour took on the look of an RV Park and those that braved it sleeping bag style looked askance at those living the Winnebago high life thinking how things had changed.  In the ’80’s, the Bags ceased to be and it was vans and RV’s.  Then the weekend died … or did it?

Fast forward to the present and overall PBSCC has become a kinder gentler club.  Our membership isn’t the competitive folks of yore but more so ones that like to enjoy their cars and also the people that own them.  Gone are the events such as the TSD and Monte Carlo Rallyes, the Autocrosses, our not-for-the-faint-of-heart Rallye “The Nacimiento Rallye” which if you never ran one, was really something.  An occasional Wine Tour has been held but the signature Rallyes have evolved into Tours with basic rallye instructions.

For 2018, the Tour had two clubs traveling on back-roads with about ten seconds of freeway, PBSCC and the Cypress MG Club.  Steve Kellogg planned this year’s Tour to Cambria and we left Carmel promptly at 10am.  We had eight cars ranging from a Mazda MX5, a couple of nice MG’s, a Jaguar and an Alfa, some late-model Mopar products, and an uber cool C3 Corvette.   Route instructions were easy to follow and well laid out.

Heading down Carmel Valley Road, we twisted and turned navigating the roads leading us through shade trees, fields of cattle, and gorgeous wildflowers. 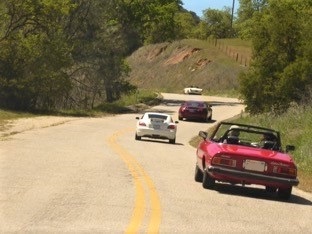 Once we cleared the canyons of Carmel Valley, we entered US 101 south of Greenfield and almost immediately exited onto Jolon Rd. in King City for a splash of fuel. 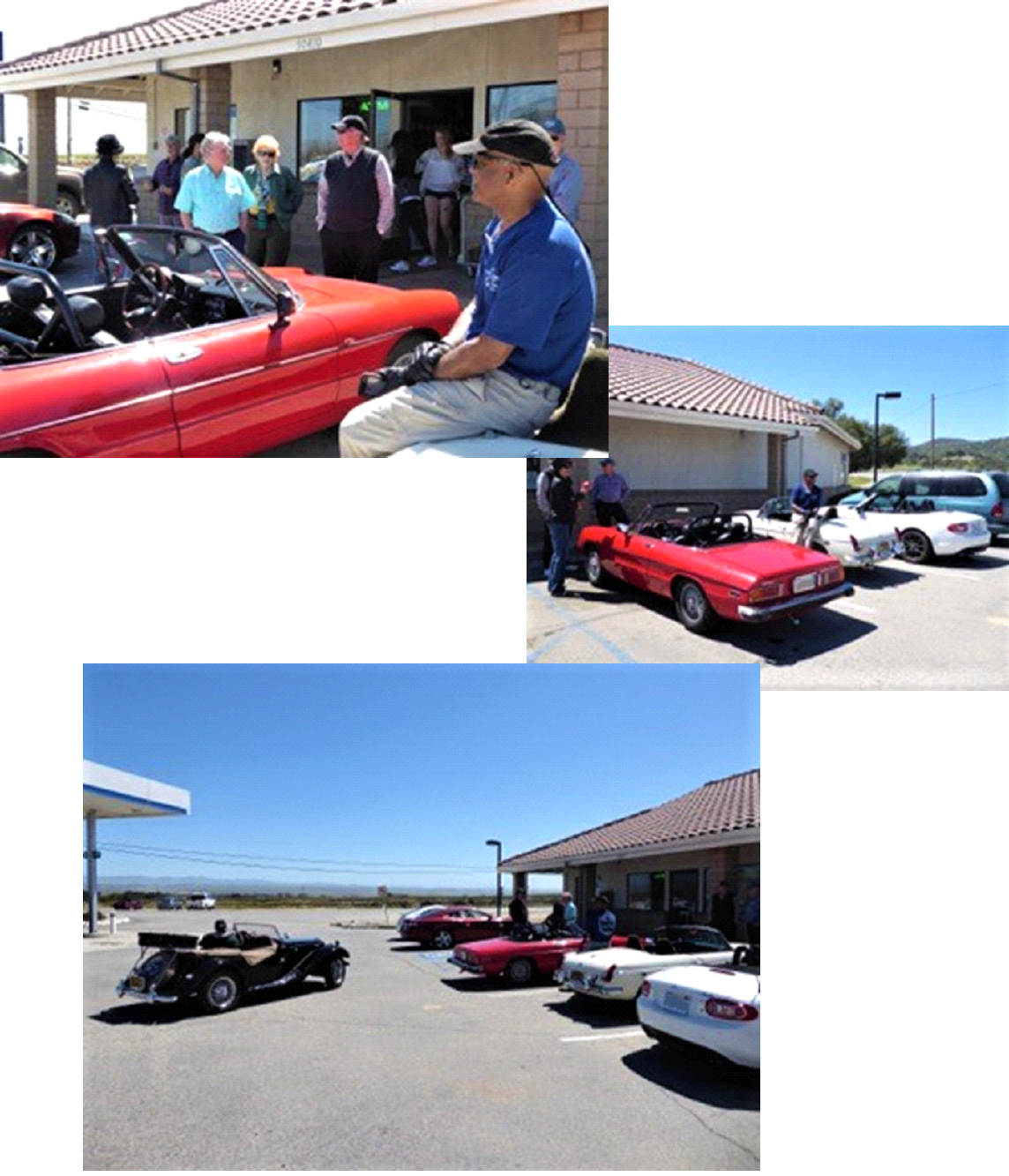 A brief stop for fuel and back on the roads to the Interlake areas (San Antonio/ Nacimiento Lakes) to our second stop at Rock ’n Robles Pizza for well-deserved human sustenance. 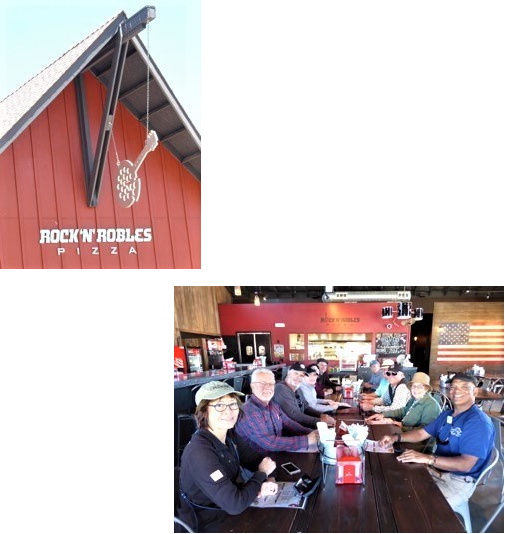 After bellies were sated, we left the lunch stop and continued south, then west, on more backroads before ending up on Hwy 46 West to drop down to Hwy 1 just north of Cambria.  On this last section, we traveled past several world-class wineries with a few of us thinking this might just be a subject of yet another Tour. 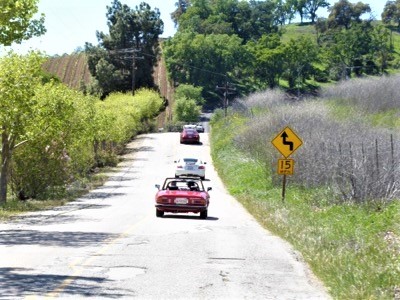 Our destination, Cambria Pines Lodge, was campus-style for rooms and we found ours really nice.  The room was clean with all the amenities and most, if not all, of the rooms had a fireplace.  Breakfast was part of the lodging and what was also nice was a lowered room price just for us Tour participants.  The staff was exceptionally nice and took excellent care of us.  Vicki Kellogg and I decided on an impromptu visit into Cambria 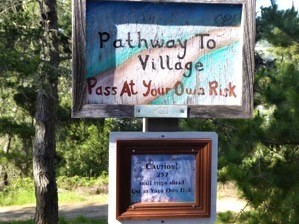 proper for some sightseeing and shopping but the only way down was via a log staircase of about 257 steps all of which were down the backside of the mountain.

I found this somewhat cool; Vicki … not so much.  Shopping needs satisfied, we decided on an alternate route back up on the side of the main road.  About 100 feet into this decision, we both realized that death by automobile was imminent and after crossing the road and hightailing it over the guardrail (this is a mountain after all), found a path that was fairly safe.  Also of note was Vicki not having a clue what poison oak looks like and I pointed it out at every step thereby saving her a night of meeting Itchy McScratchy.  I found a really cool Porsche Can-Am poster (an original one, I think) at an Antique shop, bought it, and gave it to Dave that evening.

On our own for dinner that Friday evening, several ventured into Cambria while others stayed at Cambria Pines.  Quite noteworthy was the Lemon Merengue Pie at Linn’s in Cambria. 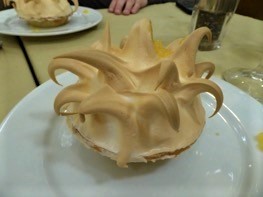 Next morning, we enjoyed hotel breakfast and then headed on yet another Tour from Cambria up and over the rough and narrow Santa Rosa Rd. This road crossed Hwy 46 and most of the caravan continued south. 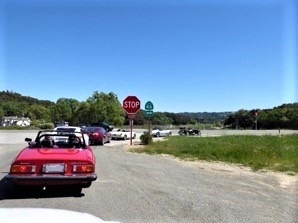 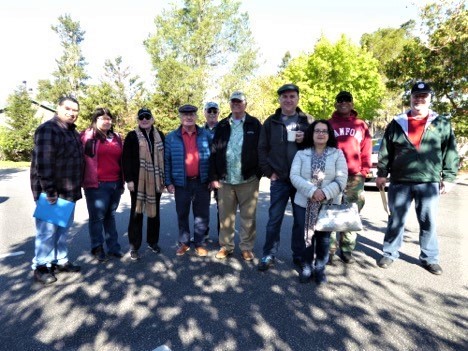 Dave and I turned towards some wineries but apparently few open before 11 and being 9:45, that gave us opportunity to visit Templeton and then see a Gem Show at the Paso Robles Fairgrounds.  Looking at rocks (some were pretty cool) and other geological stuff can only occupy so much time so when we were done there, we met everyone at Firestone Brewery in South Paso Robles for lunch and libations. 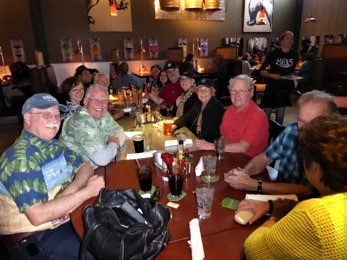 Afterwards, we got to tour PBSCC member, Jeff Sines’ wonderful collection of cars.  His “House on the Hill” with the fabulous garages full of automotive coolness was the highlight of the weekend. 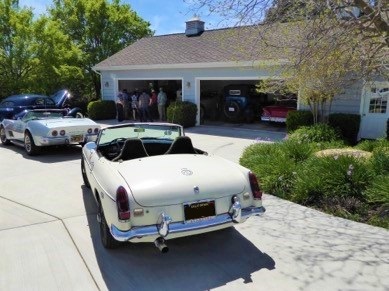 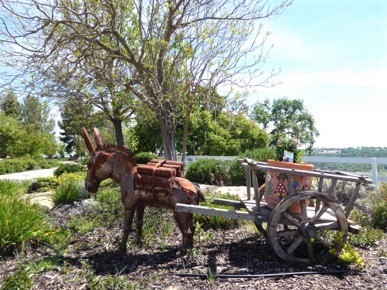 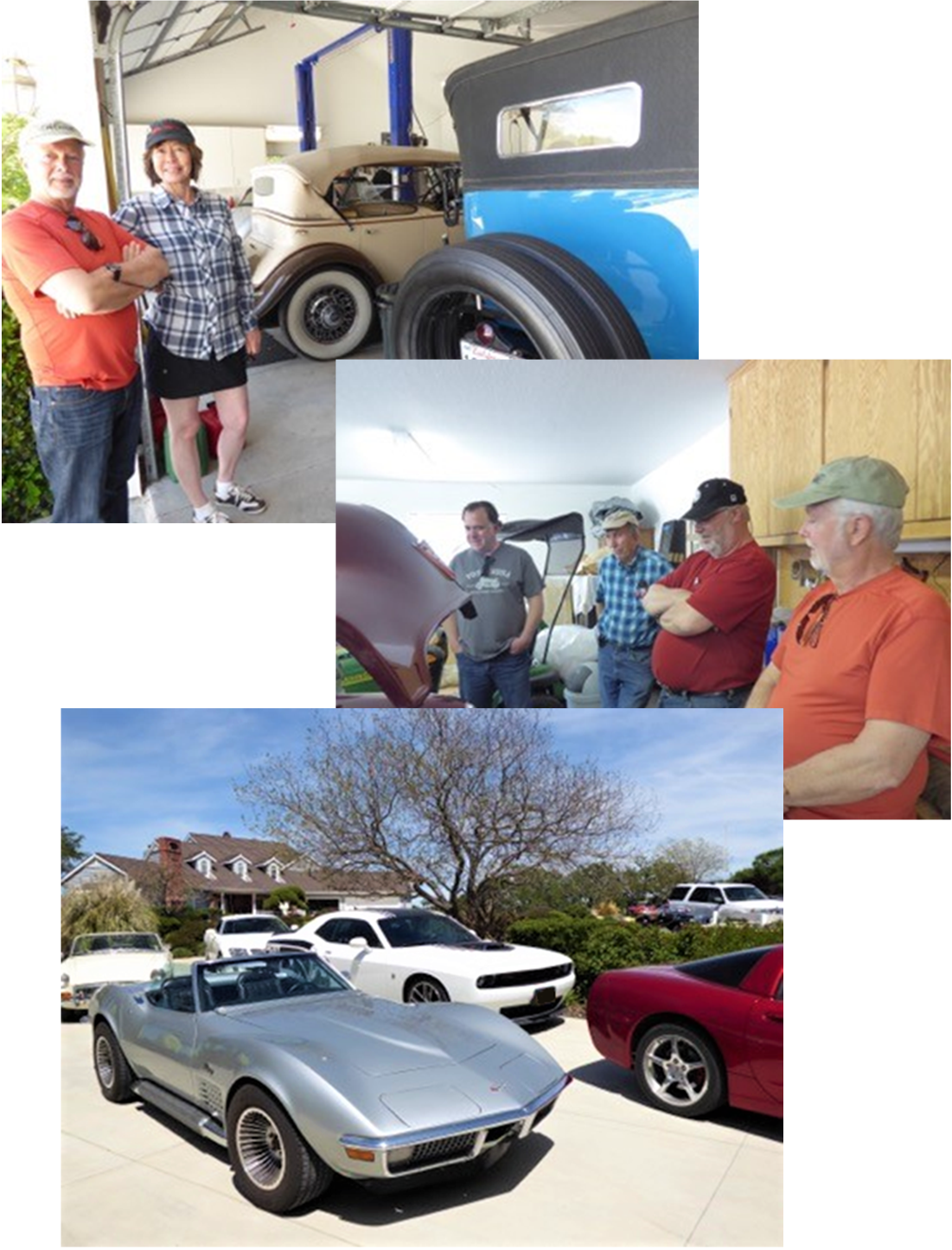 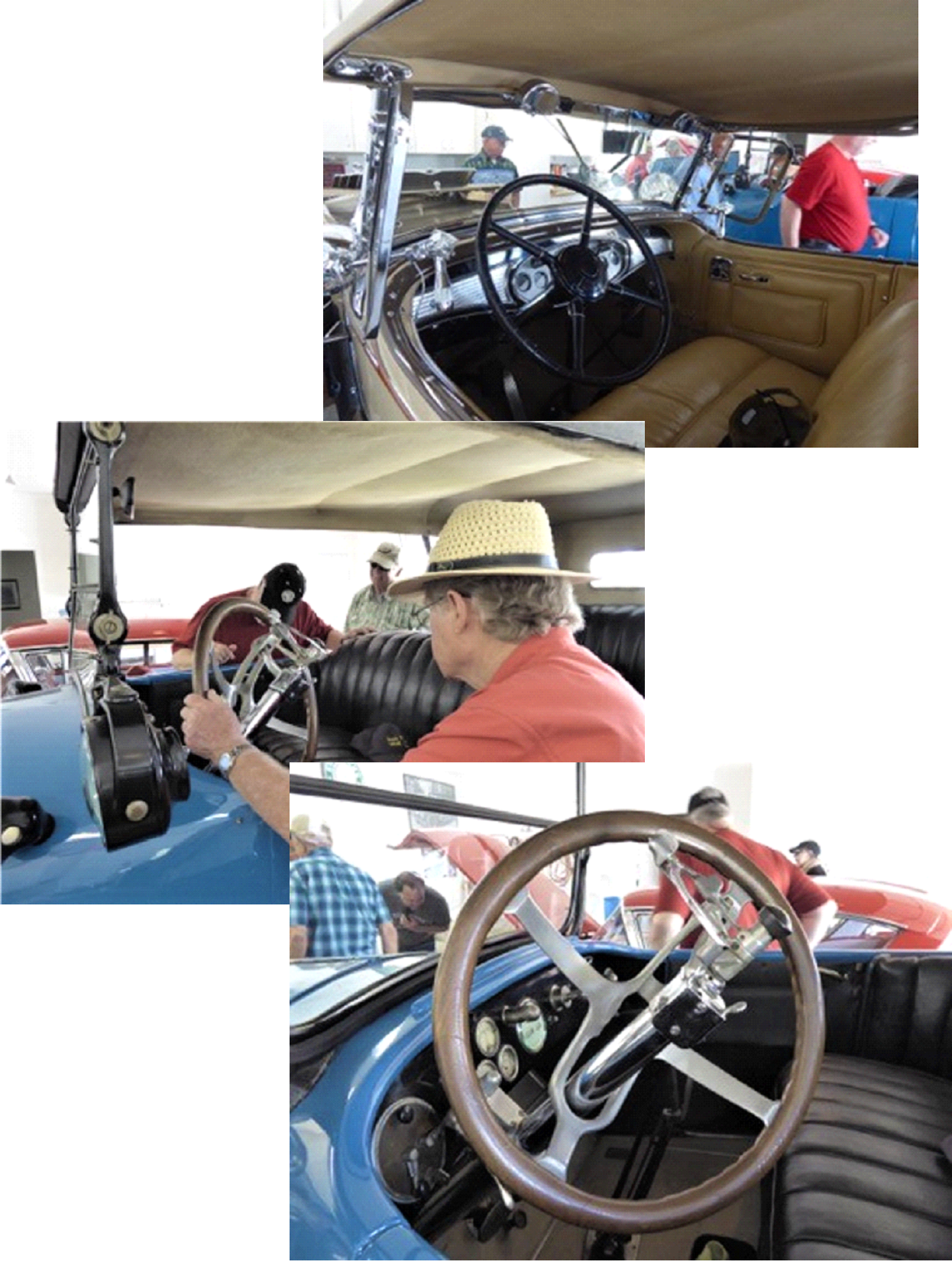 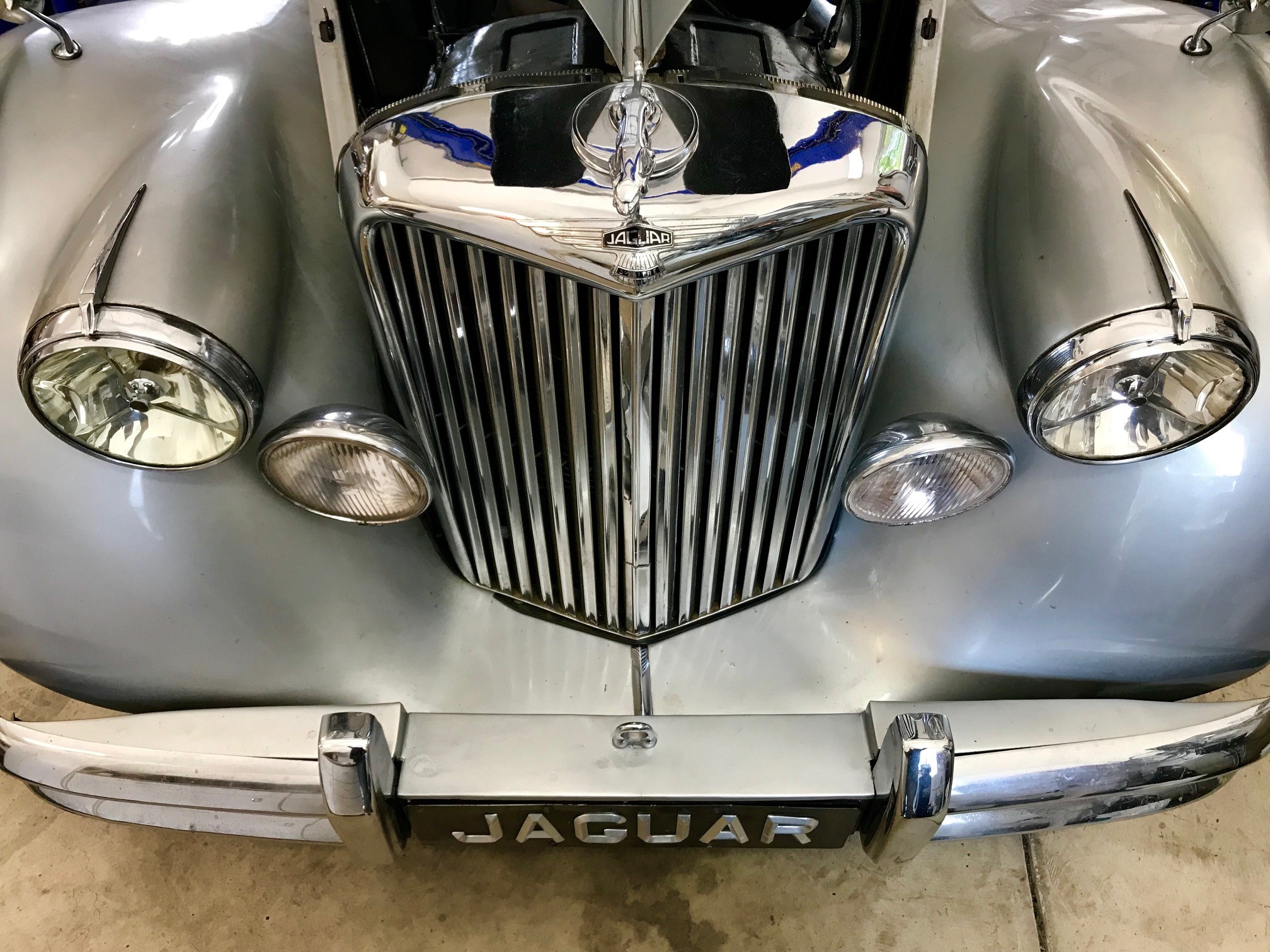 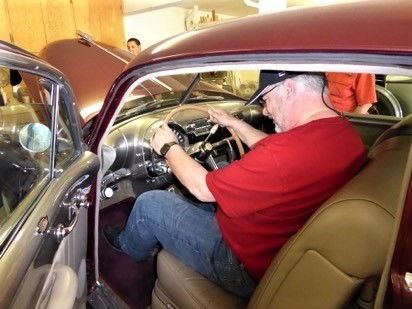 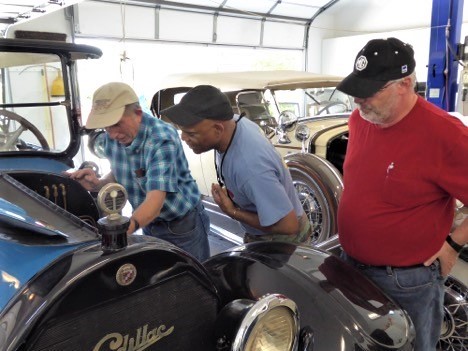 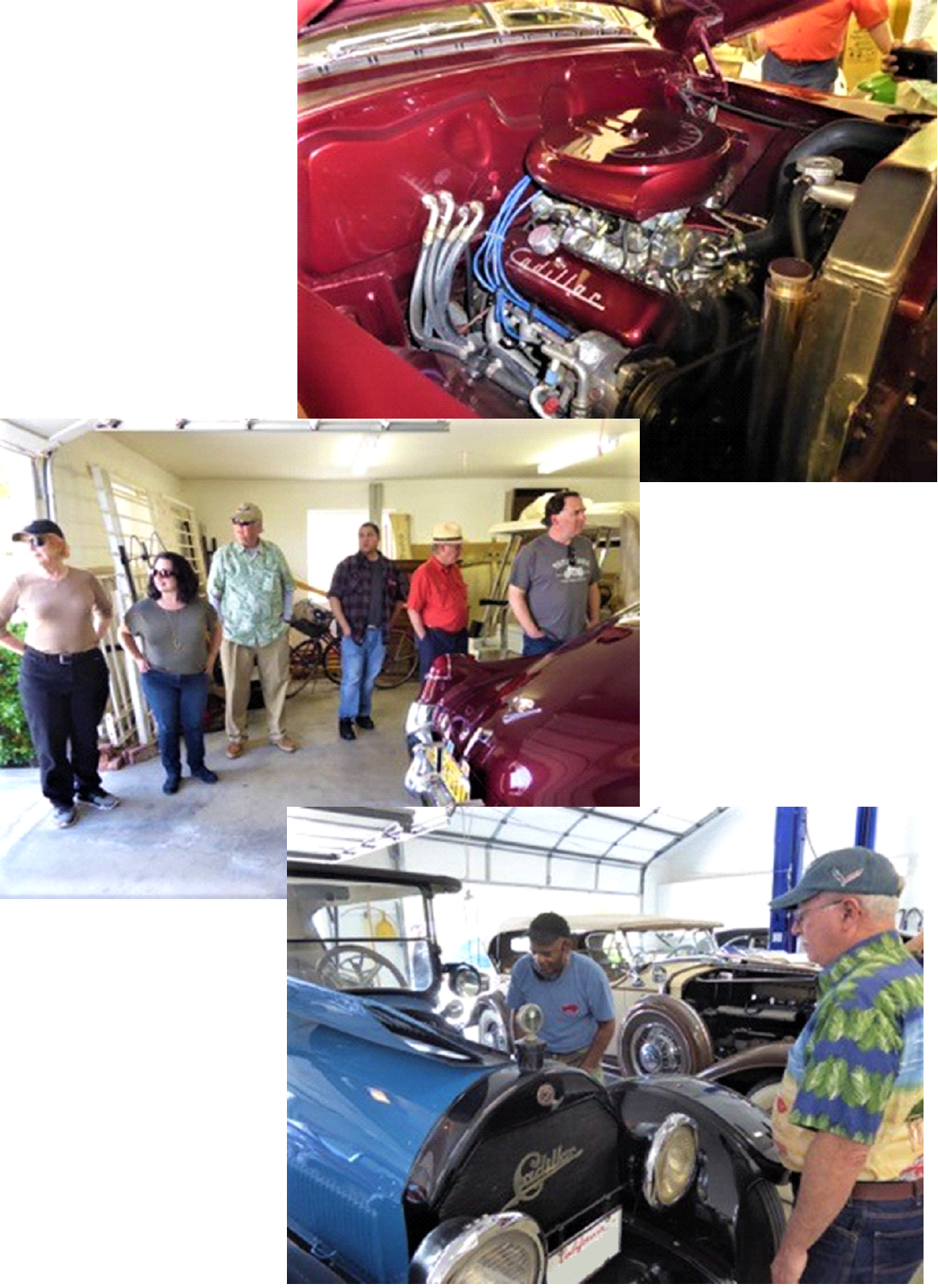 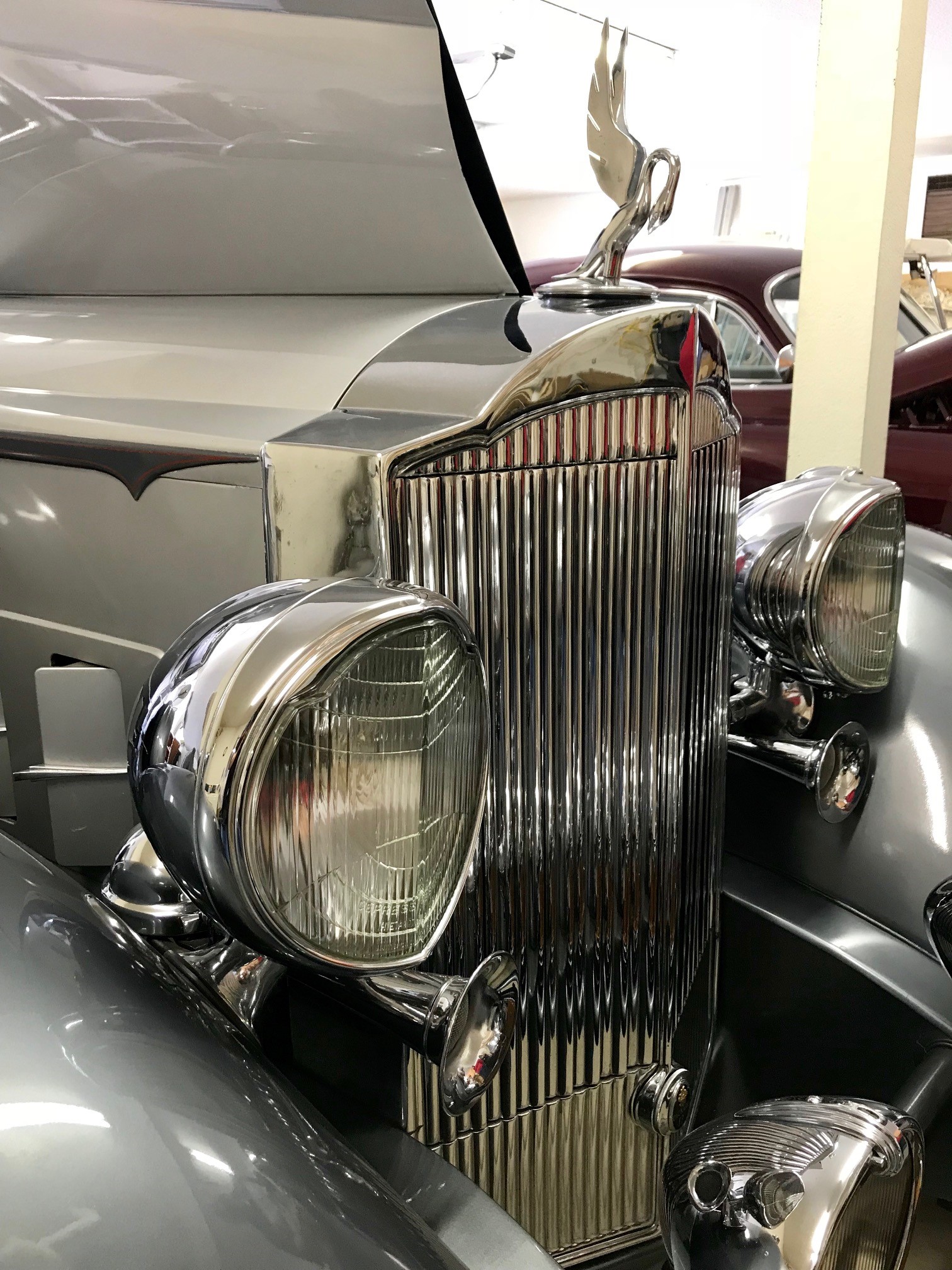 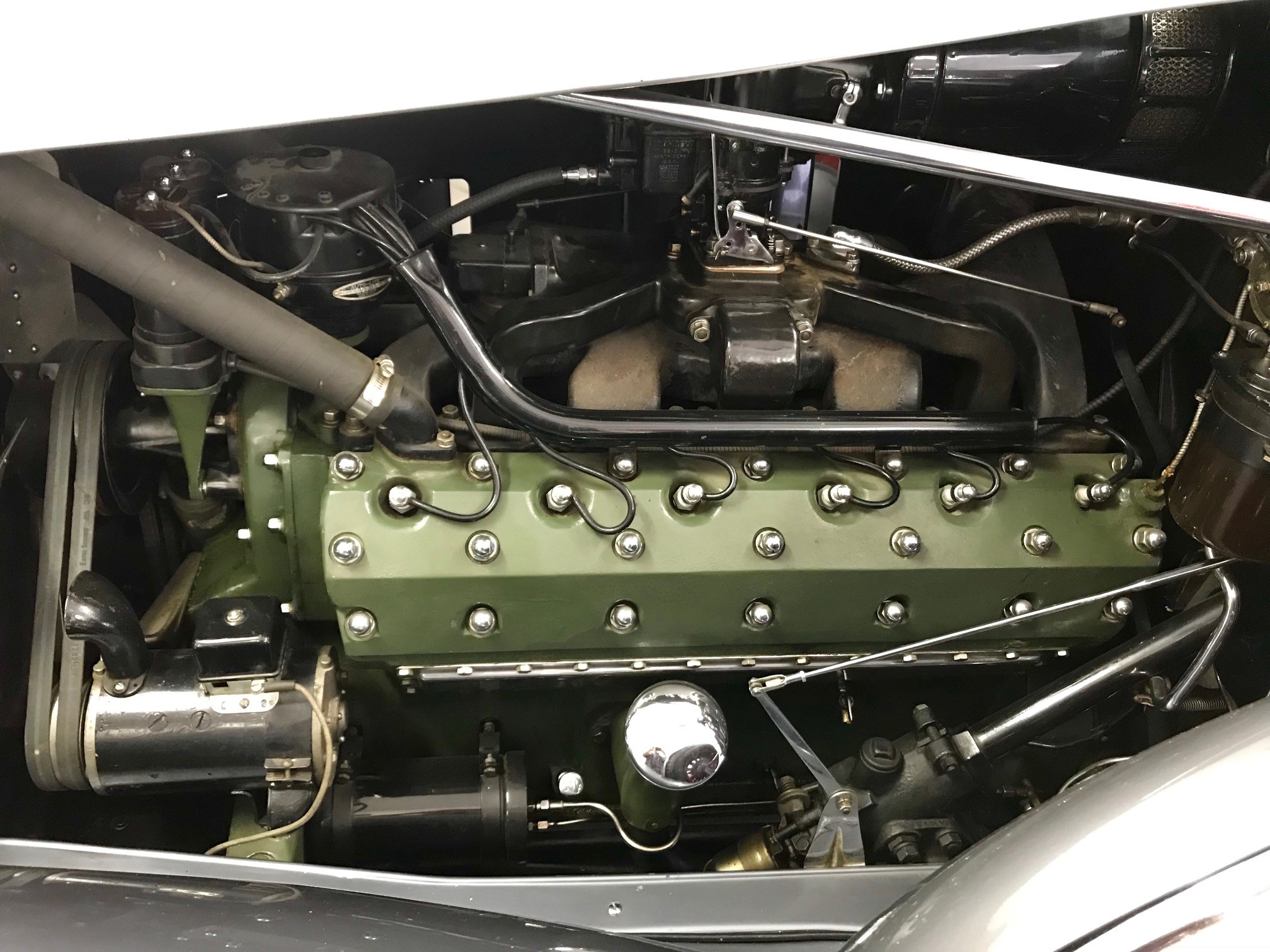 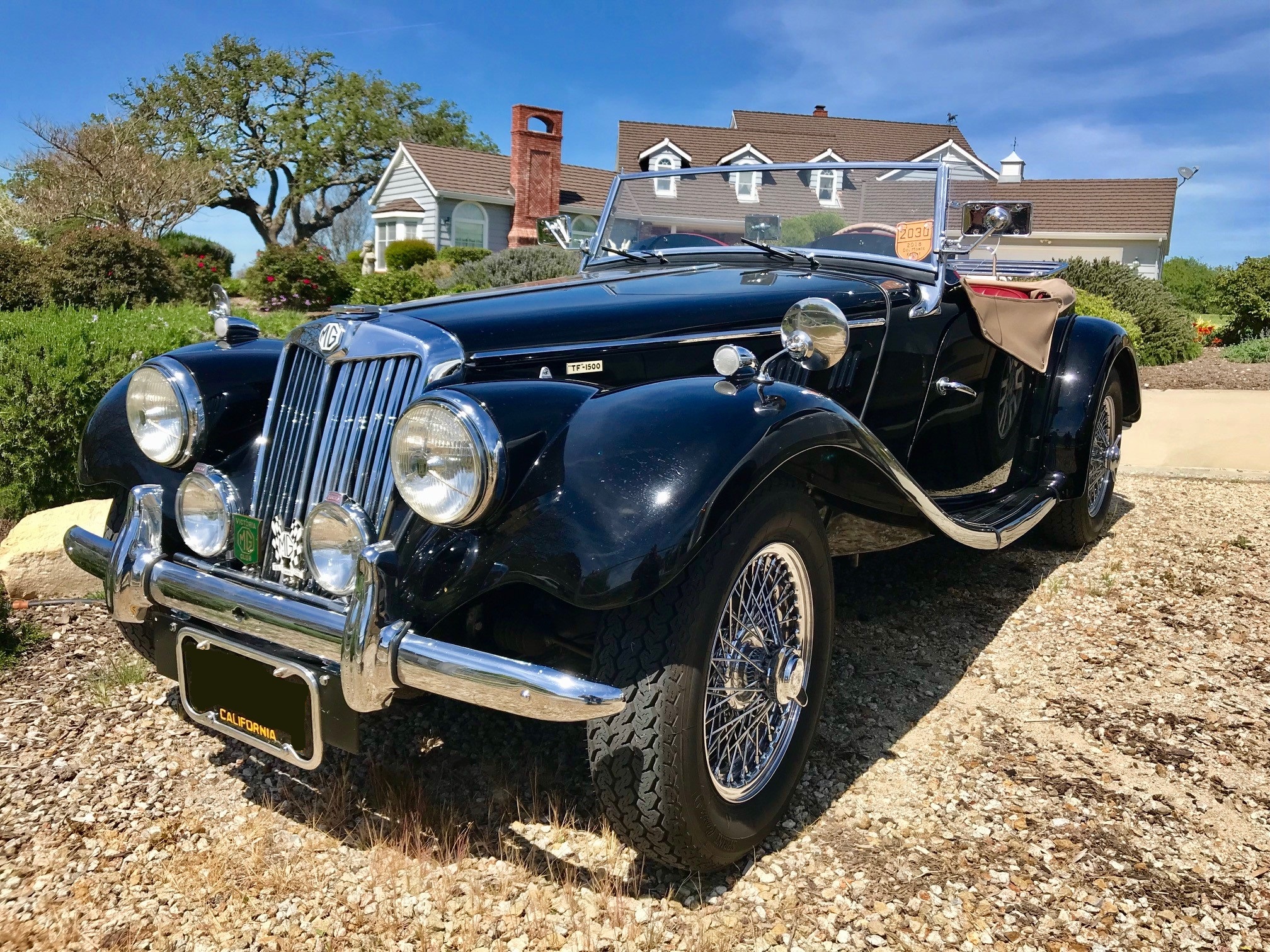 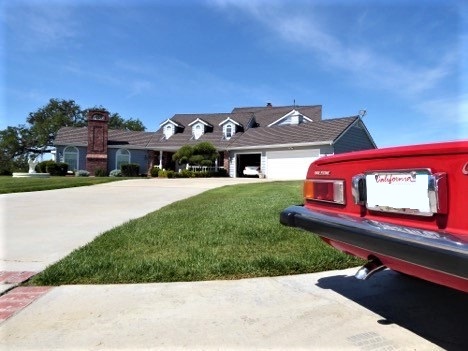 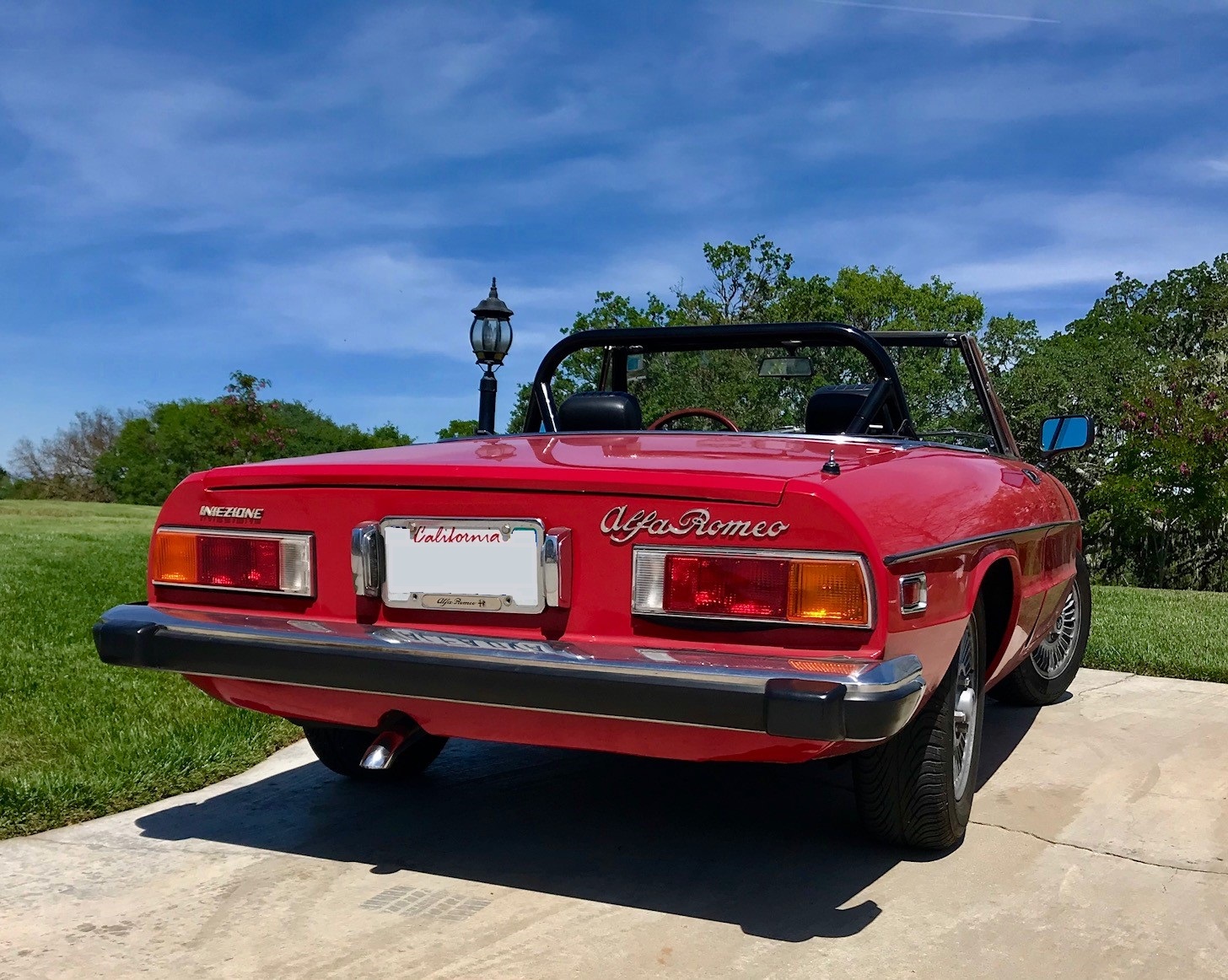 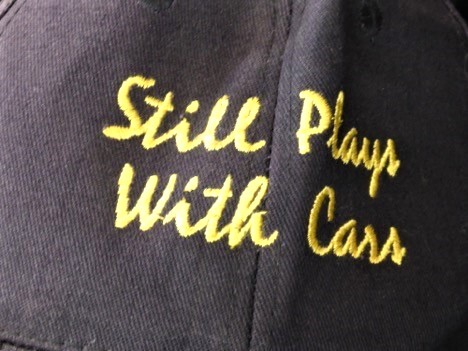 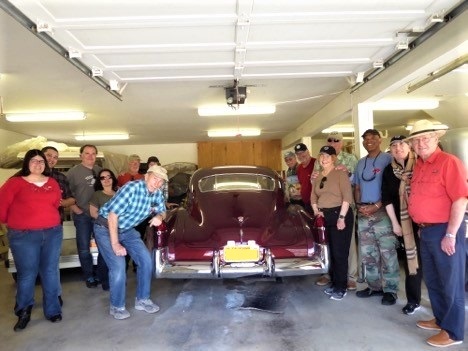 Steve also arranged a real-deal Santa Maria style BBQ.  Now if you haven’t a clue what this entails, think of marinated Tri-Tip, grilled chicken, fresh green beans, mashed potatoes, salad with fixin’s, garlic breads and butter, and finished with wonderful carrot (or chocolate if you were allergic to walnuts) cake. 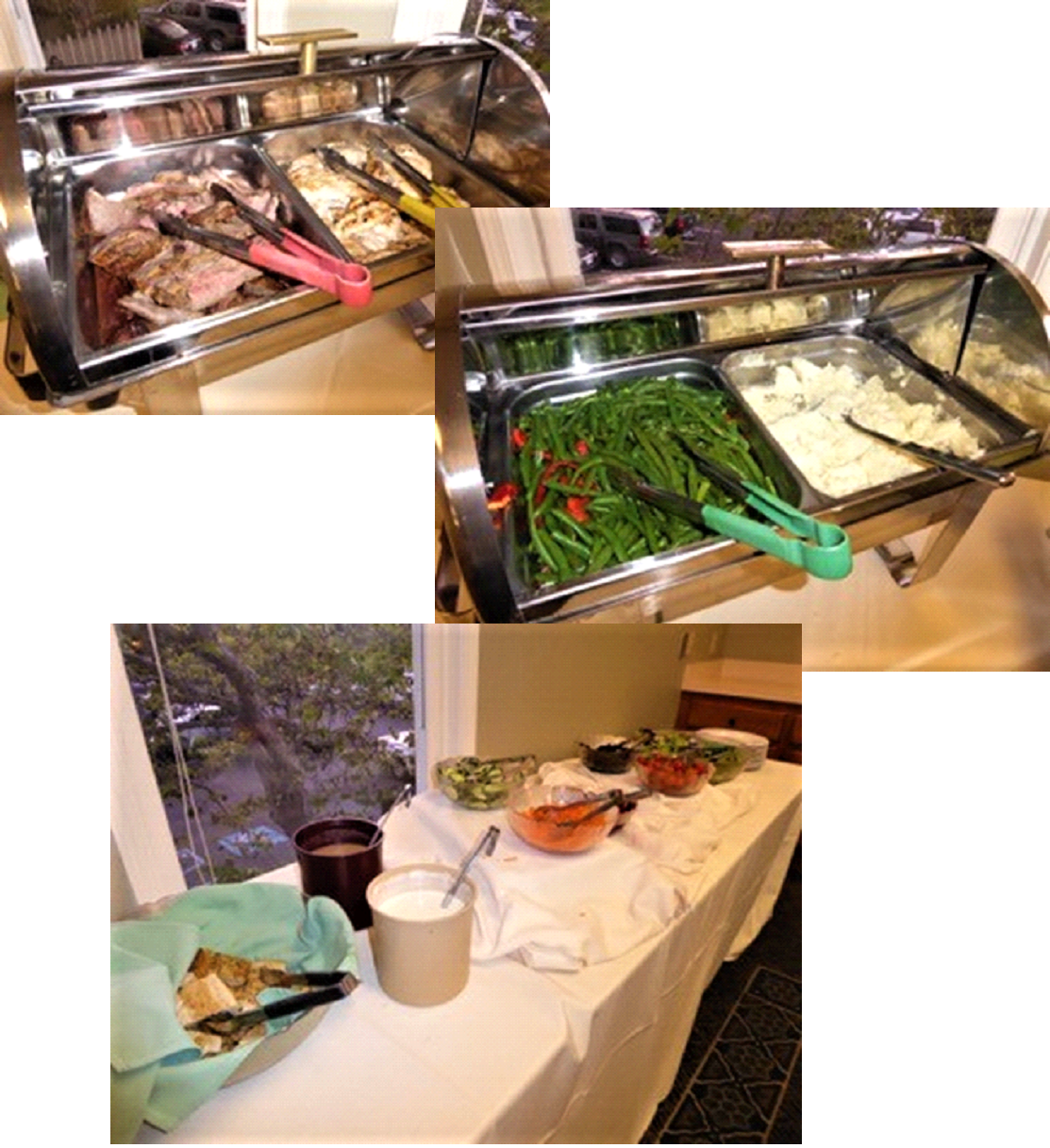 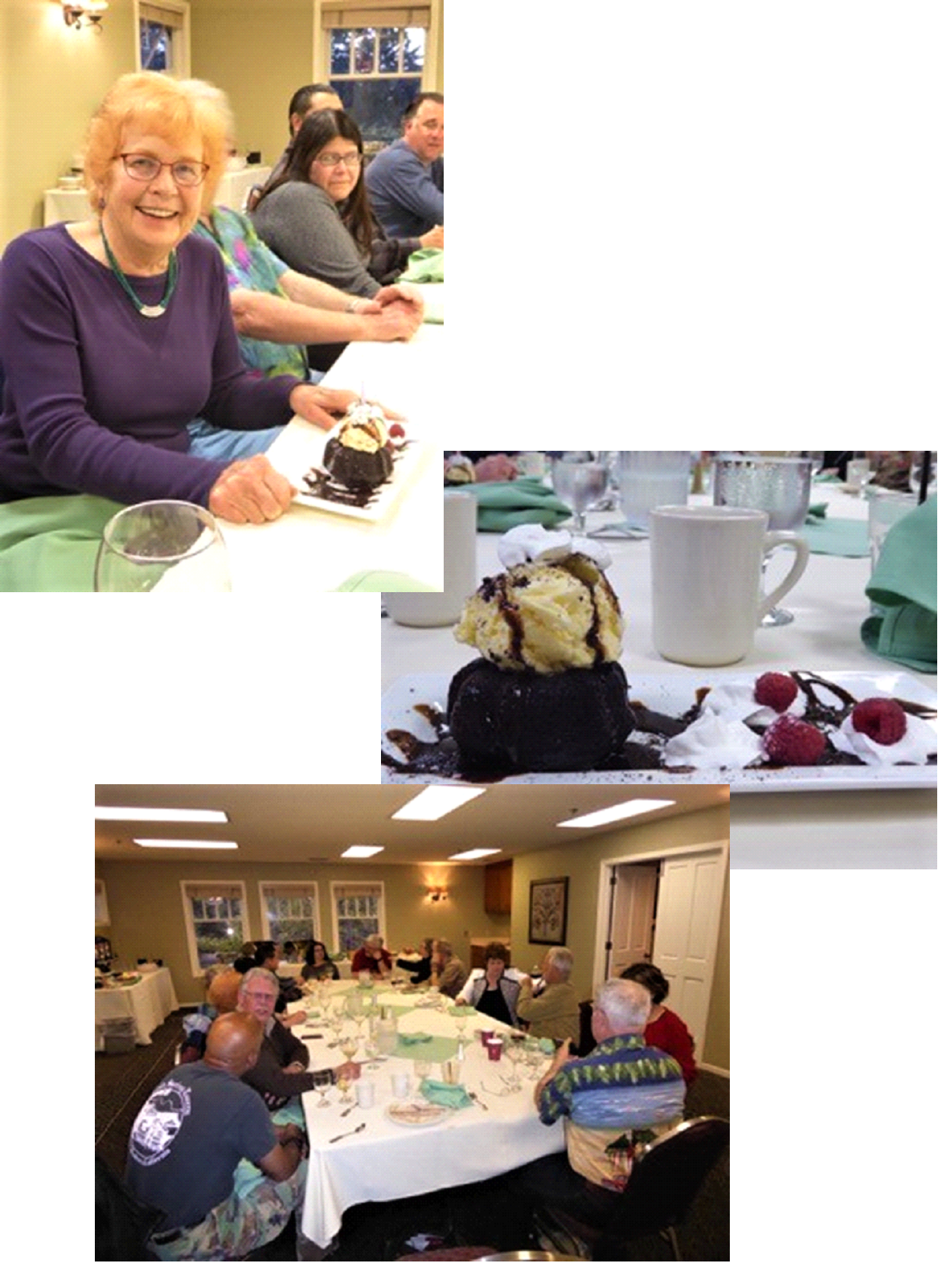 With the hotel bar just down the stairs, we were set for the evening.  Several of us stayed for the live music in the bar while others called it a night.

Sunday morning, we again met in front of Cambria Pines to determine routes for home. Several chose to drive the shortest route, up and over Hwy 46 to continue north on US 101 while a few others peeled off on Jolon Rd. to find the famed Nacimiento-Fergusson Rd. that pretzel’d its way down, down, and down the mountain before dumping it’s automotive contents onto Hwy 1.  Those that braved Nacimiento-Fergusson headed North and after stopping for a late lunch in Big Sur, arrived back on the Monterey Peninsula and home. 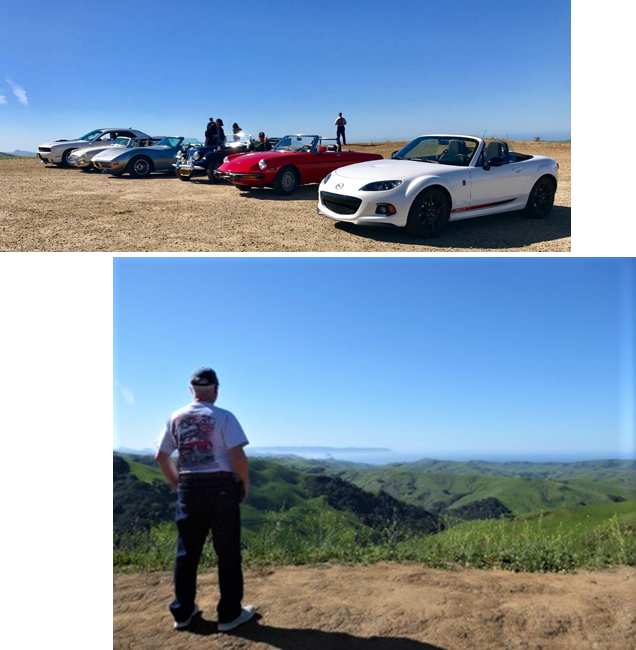 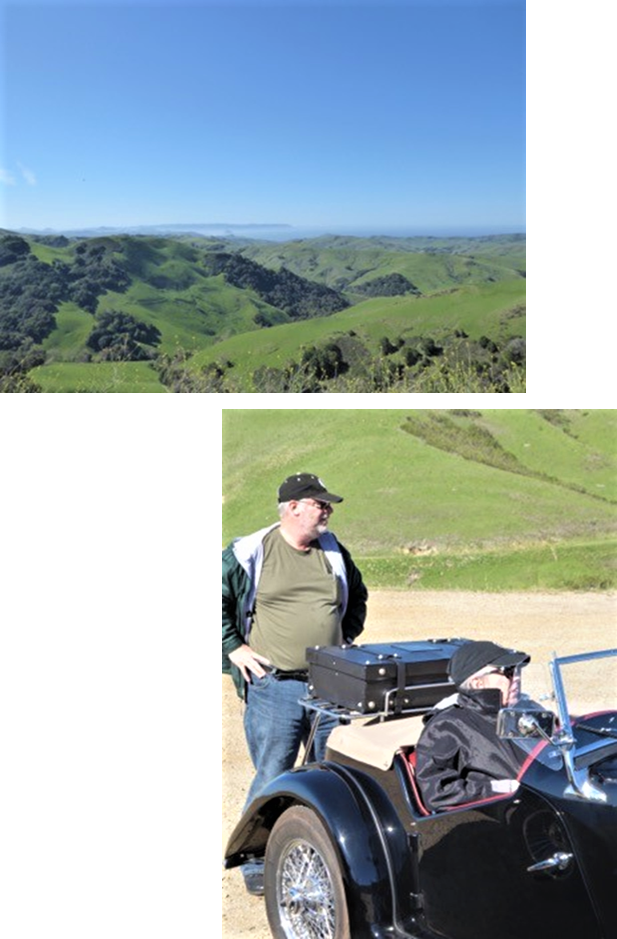 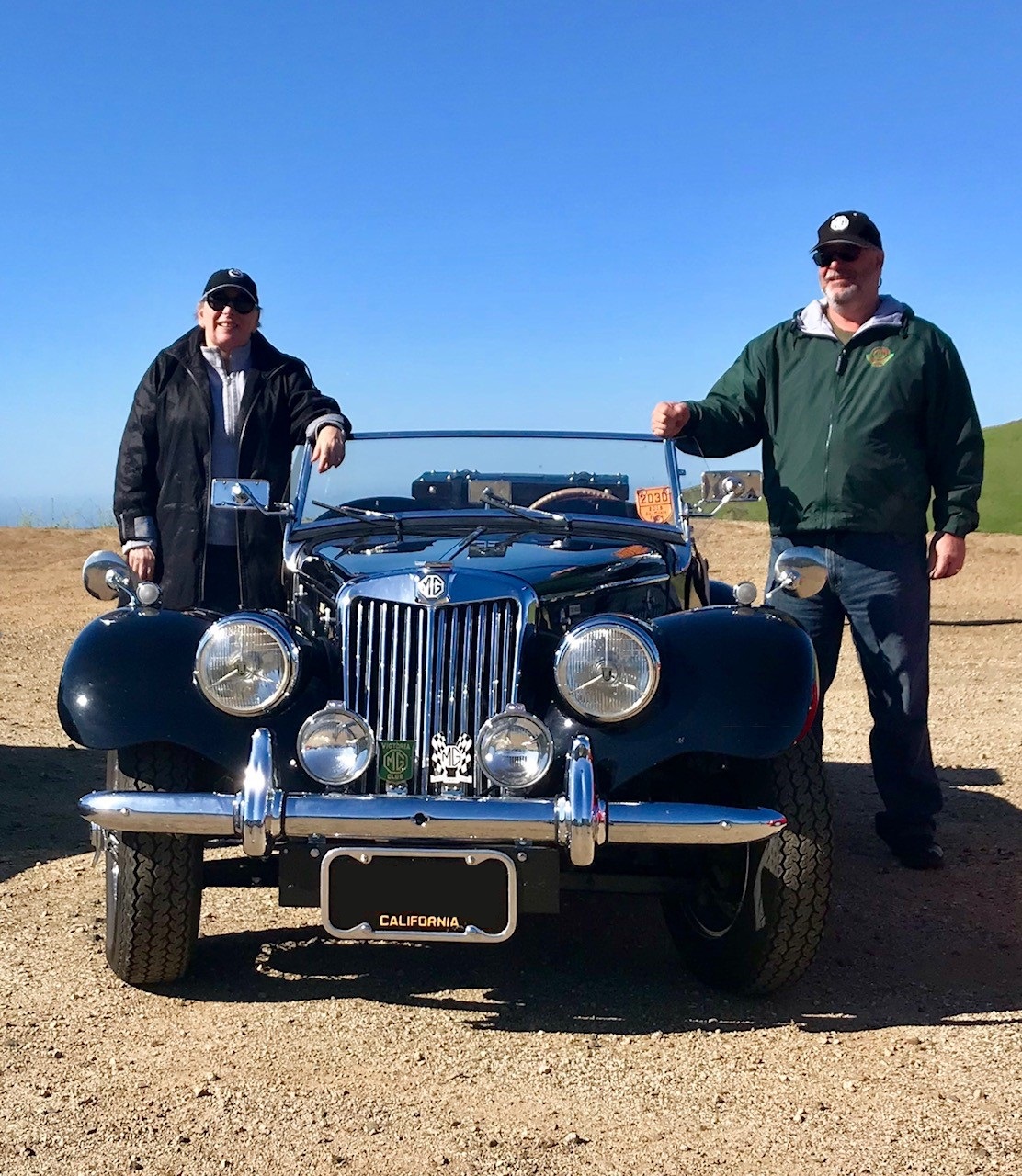 In closing, what really struck me in a good way was how mannerly we caravanned.  No traveling at 90+ mph pissing off locals or leaving those behind in a cloud of dust … or oil … or coolant.  And as for the oil or coolant, Dave and I were the sweep car and behind the MGB and Alfa.  Puffs of smoke preceded lubrication smells and it was a toss-up on which car was the originator.  Our first fuel stop in King City solved the mystery … the Alfa won the OPEC award.  Dave also commented on how nice this Tour was as in years past, another marque club had a Tour and there were two groups, the Slow Guys and the Haul Butt Guys.  The Haul Butt’s did just that and while all ended up good for them, by the time the Slow’s got to the areas where the Butt’s had pissed off the locals, rocks were thrown in appreciation of their fine displays of speed and exuberance with several finding their marks.   Thankfully, PBSCC isn’t “That Group …”